Bill Nuccio has over 40 years of experience in the automobile retail industry.  Beginning his career at a local Buick dealership, Bill was recognized as the top sales associate during his first three years of work and understood the importance of customer satisfaction.

In 1986, Bill brought his talents to a local Mercedes Benz & BMW dealership in Westmont, Illinois.  At that time, they were the number one Mercedes Benz and BMW dealer in the Chicago region.  It was here where Bill excelled at building teams and being a leader within the organization.  He created an opportunity to launch a satellite pre-owned luxury car department in 1988. This provided Bill the experience with hiring staff, meeting goals, leading teams, and managing inventory.  Three years later, Bill was promoted to become the sales manager and was responsible for leading a team of 16 sales associates.  Bill helped the dealership maintain its number one position in the Chicago region for four straight years.

With his leadership expertise and commitment to customer satisfaction, Bill decided it was time to take his career to the next level.  In 1994, Bill owned his first automobile dealership named St. Charles Classic Motors, where he specialized in luxury, sports, and exotic automobile sales.  While building a strong reputation around the country, two well known manufacturers were taking notice.  Within just two years after opening his first dealership, Bill added both the Lotus and Lamborghini franchises to his business.  With this addition, St. Charles Classic Motors quickly became recognized as one of the better known sport and exotic dealerships in the country.  Furthermore, Bill grew his reputation by building strong relationships with his customers, as well as building a team of employees that understood the goals and objectives of the dealership.

In 1998, Bill renamed his dealership Fox Valley Motorcars and relocated to West Chicago, Illinois.  The new location gave him better exposure to a larger local retail market.  Fox Valley Motorcars quickly became top performers with both Lamborghini and Lotus brands.  For seven straight years, Fox Valley Motorcars was the number 1 Lotus franchise in the U.S.  The dealership also gained notoriety by hosting many events geared towards its customers.  These events provided his staff an opportunity to build special bonds with their customer base.

Bill continued his leadership within his dealership and took great pride in maintaining a high level of customer satisfaction.  Continuing at being a hands on leader, his customers benefited in a way where he interacted daily with them.

In 2006, Bill continued his success by building a brand new, state of the art dealership in Westmont, Illinois.  Boasting a two story, 20,000 square foot facility, Lamborghini Chicago quickly became an example to dealerships across the country of how to build a look and feel that will attract the public.  The dealership quickly became a destination for auto enthusiasts.  It was on the cutting edge of design, becoming one of the first dealerships in the country brining modern amenities and comfort to the consumer.

Throughout his 36 years in the automobile industry, and especially during his 15 years as owner and president of Fox Valley Motorcars and Lamborghini Chicago, Bill created and maintained a system of establishing thousands of relationships not only in the Chicagoland area, but also throughout the country. 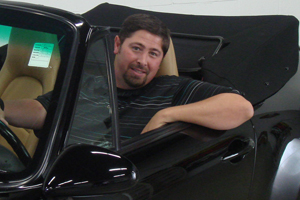 Bill Nuccio Jr was born into the car business from a young age. Starting at age 15, Bill Jr started his first official job with Laurel Motors MB/ BMW in Westmont where Bill Sr was working at the time. This brought the passion and excitement for cars to life. Being around the finest automobiles in the world gave Bill Jr the opportunity to know a side of the car business that not many would ever experience.

During the time Bill Jr was studying at Purdue University, he was also working at St Charles Classic Motors, the only franchise Lotus and Lamborghini dealer in Chicago. Initially his focus was in Electrical Engineering and would ultimately earn his associates degree in this field but realized part way through that the true passion he had was in management / entrepreneurship. After finishing the Bachelors degree at Purdue, Bill Jr went on to start his full time career with Fox Valley Motorcars. Beginning in the service department gave Bill Jr the opportunity to see the back end of the business and how that works. Although it is a difficult end of the business, it was a great learning experience and a perfect foundation to understand the inner workings of the sales department.

After about 2 years in service, Bill Jr made his way up to the sales floor where he found a home with a great base of clients and the best cars in the world to work with. The passion began to exude from Jr when he began to learn more about the Lotus product and immerse himself into that community of people. He found a career that was extremely fitting and full of passion and excitement. This opened up a whole new world of events, weekend drives, track days and other activities to get the customers excited about ownership of their vehicles.

Although Fox Valley had been doing track days for many years now, the client base of Lotus customers brought the track days to a whole new level. As members of Autobahn CC, we were able to do several different types of events, including driver education days and all the way up to a full racing school focused on the Lotus brand! During the time Bill Jr was on the sales floor he worked close with Bill Sr in developing events, marketing, sales, internet and many other areas of the business. It is a small business and we all needed to wear several hats in order to make it all work! Ultimately, Bill Jr also learned much about the Lamborghini brand and assisted in sales with Lamborghini, and all of the pre-owned hand-picked sport, luxury and exotic vehicles.

Although this business has changed greatly over the years, we still have maintained our relationships with our clients and keep in touch with them via email and phone on a regular basis. I find that working with my previous clientele gives me an edge in this business that allows me to find the best cars available to purchase and has allowed me the opportunity to continue to service the same clients for over 10 years. My clients always like to come back to me when looking for a vehicle because we know how to treat them fair and always find thim what they are looking for. I like to make dreams come true and aspire to build new relationships every day!! If I can assist in seeking out your dream car, I am here to help. Advice is free, so do not hesitate to call anytime!! 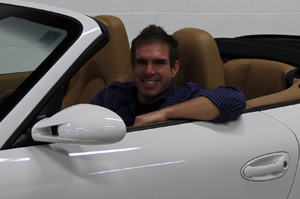 Chad has worked in the auto industry all through college and since his graduation in 2004. He has worked with Lamborghini, Lotus, and other high end exotic and luxury vehicles through FoxValley Motorcars / Lamborghini Chicago. Presently Chad is taking photos and working on website and various other marketing sites for Motorcars International by Bill Nuccio. Chad loves anything fast and playing on the water with his waverunner. He also likes riding on motorcyclyes, 4 wheelers, and snow mobiles, really anything with a motor!! Chad enjoys taking in a good movie and traveling with his family when he has time!!